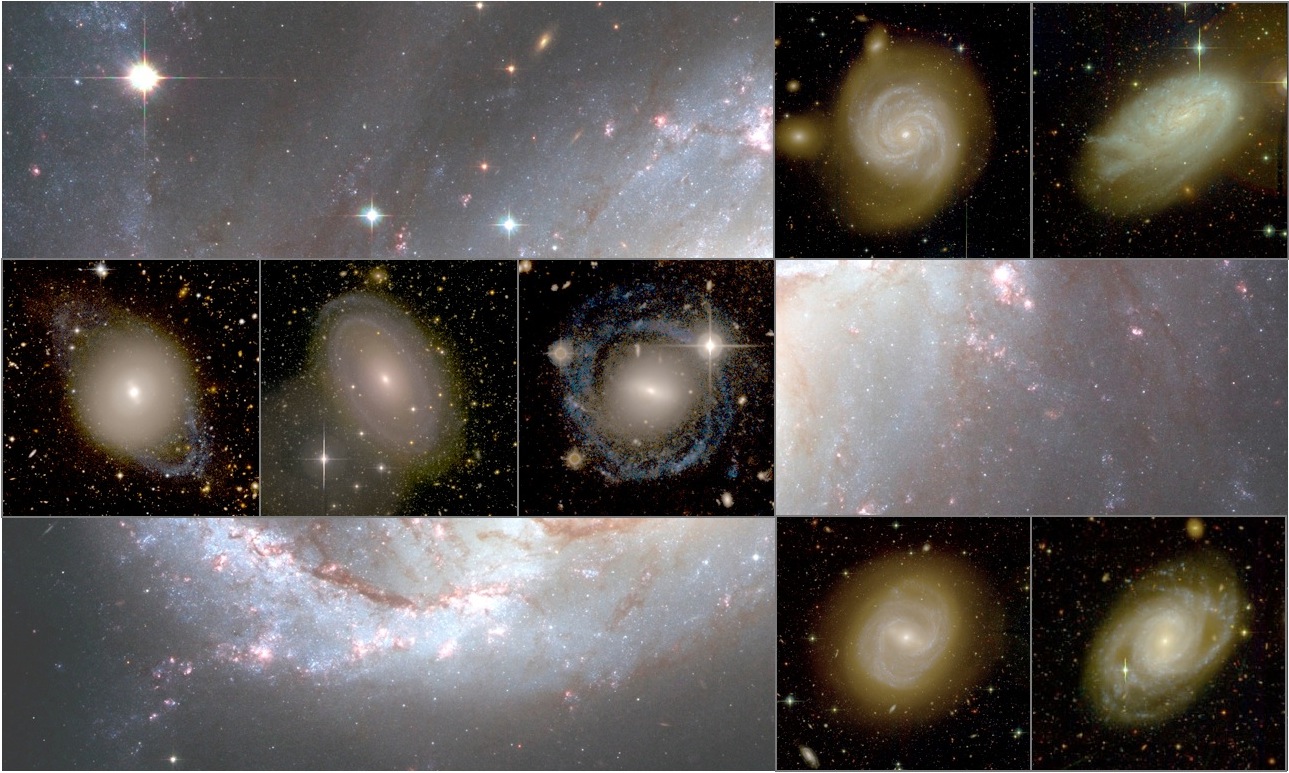 Among them, Early-type galaxies (ETGs) – 260  objects- was selected  based on the absence of prominent spiral structures or dust lanes. See details in Cappellari et al., (2011)

Images of Atlas3D galaxies belonging to the Virgo Cluster (58 ETGs) were obtained as part of the Next Generation Virgo cluster Survey which imaged with MegaCam an area of 104 deg2 of the Virgo Cluster in 4 bands – u*,g’,i’,z’ – (observations pending in the r’ band) at an unprecedented depth. Observations took place between 2009 and 2014 and exposure times ranged between 6400 sec (in u*) and 2050 sec (in i’). Details about  the observing strategy bay be found in Ferrarese et al. (2012)
Besides, the NGVS provides deep imaging data for 61 late-type galaxies from the Atals 3D parent sample.

Atlas3D galaxies outside Virgo were observed until 2012 through several individual programs. About 1 square degree around each galaxy was mapped with MegaCam.  In order to optimize the detection of extended low surface brightness structures, individual exposures were obtained with large offsets on the sky (of typically 20-30 arcmin) between them. They were then sky-subtracted and stacked, with the same data-reduction pipeline, as for the NGVS, Elixir-LSB developed by Jean-Charles Cuillandre.

Starting semester 2013A and until 2015, the observations were carried out as part of the MATLAS Large Programme (PI: Pierre-Alain Duc), with the same observing strategy as for the previous individual programs. Total exposure times were 7×345s for the g’ and r’ bands and 7×230 sec for the i’ band. In addition, u* band images (exposure time: 7 x 4900s) were obtained for a sub-sample of galaxies  located at distances below 20 Mpc. Observations were complemented in 2016 by short exposures for the galaxies suffering image saturation in their inner regions.

Besides, images in at least one band of 55 Late Type galaxies belonging to the Atlas3D parent sample are available because of their location in the field of view of one ETG .

The Canada-France Imaging survey (CFIS) images ~5000 square degrees of the Northern sky in the r-band. The Elixir-LSB processing provides deep LSB compliant images with a limiting surface brightness of 28-28.5 mag.arcsec-2